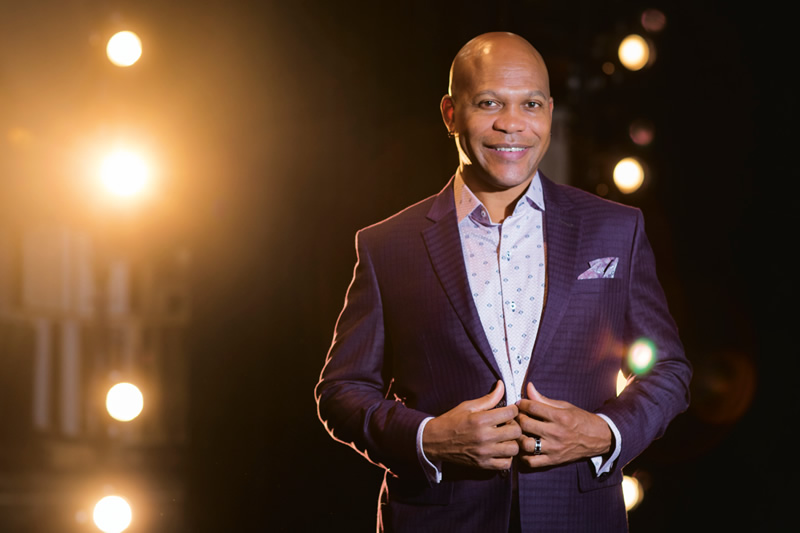 learned early on
the power of LISTENING

The youngest of seven children in a Hickory, North Carolina, home, Elondust Patrick Johnson found peaceful abundance in staying close to his single mother’s side. He listened to her hard-won wisdom as she laid the studious, observant foundation for his lifelong pursuit of art and scholarship. He listened to his grandmother, herself the granddaughter of an enslaved man, who had learned how to navigate a world hostile to her existence. He listened, skeptically, to his first-grade teacher in a newly integrated school when her thinly veiled racism leached out. He listened to legions of others—Black, gay, Southern men; Black, queer, Southern women; domestic workers; gospel musicians; theorists; prac­titioners; and anyone else with a story to tell—and he helped them tell it. His listening was radical and revelatory.

“I’m doing research that in my mind is elevating the voices of people who don’t get a chance to speak and who don’t get to be in spaces like the ones we are in, these elite institutions,” Johnson says. “I want to give them that platform, and I also want to bring them into the conversation.”

After decades of scholarship—particularly ethnography— and much of it at Northwestern, Johnson last summer became the seventh dean of the School of Communication. The first Black dean in the school’s history, he is now hard at work listen­ing to the needs of the community.

“I know that I wasn’t supposed to be here, and I know that many folks before me worked very hard so that people like me could enter these spaces, and I don’t take that for granted,” he says. “But I take my background into all the spaces I am in—and the values that were instilled in me based on my experiences. And what I am committed to doing in elite spaces is wealth redistribution. So I’m inviting people to campus who don’t necessarily have access to the resources of Northwestern—students of color, Black students, queer stu­dents. It’s important that our presence be made known. I’m really committed to opening the door for more people like me to come in.”

Hickory, a small city in western North Carolina, was segregated when Johnson was growing up. White families lived on one side of the train tracks dividing the town, Black families on the other. Johnson recalls sitting in the Black section of the local movie theater as well as the feeling he got when heading to the other side of the tracks. His mother taught her children to pay attention, obey the rules, and keep an eye out. “Our entire body language would change,” he says.

Johnson’s grandmother (second from right) with her siblings and grandfather
A young Johnson at home in Hickory
Johnson with D. Soyini Madison
Johnson's husband, Stephen Lewis (left), Harold Hermann and Harold Mays, who were profiled in Sweet Tea, and Johnson
Johnson with his mother, grandmother, and godmother
Johnson in the classroom

But in Ridgeview, the Black neighborhood, he felt safe, beloved, and appreciated. He discovered African American theatre and poetry at the Ridgeview Community Center, a sense of belonging at community fish fries, a reverence for God—and inimitable style—at church, and an extended family in the network of mothers who looked after their friends’ children. Johnson also nurtured his love for learning, first with a set of secondhand encyclopedias his mother received from a family for whom she worked, but also in school, where teachers —some of whom were stifling their own racism—recognized Johnson as the bright, high-achieving, musical student he so unabashedly was.

“My mother never finished high school, and the interesting thing about that is she is probably one of the smartest people I know,” Johnson says of his mother, Sarah, who died in 2019. “She was an organizer, she was an archivist, she kept things in order, and I got a lot of that from her. And the other thing she always stressed to all of her children was education.”

Johnson complied, but unconventionally. He earned stellar grades, developed his musicianship, and was elected senior class president in high school. But along the way he experimented with his education, delivering assignments in forms they were never meant to take and planting the seeds for his unique brand of performance scholarship. Attending the University of North Carolina at Chapel Hill was Johnson’s longtime dream—in fact, it was the only college to which he applied. He started out as a theatre major, but a work-study job landed him in the department of speech communication, where he discovered the major in oral interpretation, the pre­cursor to what is now performance studies.

“I fell in love with adapting literature for the stage. And then when performance studies emerged and ethnography and oral history became part of the field, I was really fascinated with that,” he says. “I think I took twice the number of courses I needed for the major, because I just loved it.”

Even in those early days at UNC, Northwestern con­nections began to coalesce. Among Johnson’s influential professors was D. Soyini Madison (GC89), the former chair of the Department of Performance Studies in the School of Communication (and who recently retired as a professor). Johnson also worked with Della Pollock (C80, GC81, 86) on her show based on oral histories of Southern cotton mill workers. And later, when Johnson was earning his doctoral degree at Louisiana State University, Ruth Bowman (C79, GC82, 92) served as his dissertation advisor. Madison, Pollock, and Bowman had all been students of Dwight Conquergood, the former professor and performance studies department chair at Northwestern who later hired Johnson and became his mentor. Before he died, Conquergood appointed Johnson as his literary executor to publish his collection of essays, which Johnson did in 2014.

“There was a legacy I was following,” he says.

Johnson was accepted to Northwestern’s performance studies doctoral program, but at the time, full funding was not available to graduate students. He chose LSU and continued his research in oral history and ethnography, turning his focus back to those from whom he first learned the power of authen­tic, engaged story gathering: his family in Hickory.

“For years I told stories about my grandmother and about my mother, and it was D. Soyini Madison who said to me, ‘You should be writing about your grandmother,’” Johnson recalls. “For my dissertation, I focused on my grandmother’s oral history as a live-in domestic for 18 years with the same family. I decided to go live with her over several summers and collect her oral history. I framed it in the context of Black feminism, because it was from my grandmother that I learned strategies about how to survive being a Black person in the United States, but she also gave me strategies for how to be a better person, how to be humble, and how to be a scholar.

“She taught me how to focus on discernment and discern­ing a situation, which is the key to being an ethnographer—not being the center of focus, but actually sitting back and observ­ing, watching, trying to understand people, listening carefully to others. And my grandmother was a master at that because she had to be as a woman of her generation. She was born in 1914 and was raised by her grandfather, who had been enslaved, and she understood what it was going to take to survive being who she was in the world. She understood that sometimes you have to be quiet, pay attention, observe, and then make your move, as opposed to reacting constantly.”

Before earning his doctorate in 1996, Johnson received a dissertation fellowship at Amherst College that eventually led to a tenure-track position in the English department. But in 2000 he moved to Northwestern and its performance studies department, the wellspring of his college mentorships and what would become his scholarly home. In 2003 he earned tenure and a joint appointment in the African American studies department in Weinberg College of Arts and Sciences and was named director of graduate studies for performance studies. In 2006 he became the latter department’s chair, and in 2012 he launched the Black Arts Initiative (now the Black Arts Consortium), his interdisciplinary collective of Black Northwestern scholars and artists.

“One of the reasons I’ve stayed at Northwestern over these last 21 years is because of the community that I have. I could not be who I am today without working in community,” he says. “What’s exciting for me in this role as dean is that I get to use this wonderful platform to build community and make it even stronger, through such actions as an investment in collaborative learning.”

His community-building and collaboration started much earlier, though, through his research. In 2003 Johnson published the first of many books, Appropriating Blackness: Performance and the Politics of Authenticity, winner of both the Lilla A. Heston and Errol Hill Awards. In 2008 he published Sweet Tea: Black Gay Men of the South—An Oral History, which would become his flagship, multimodal research and per­formance enterprise. The idea came to him in 1995, when he attended a cookout in Washington, DC, for an outreach group dedicated to Black men living with HIV and AIDS. After talking with them, he realized their stories had been a largely ignored part of the American narrative. Johnson homed in on these Southern voices and documented their triumphs and struggles in a 600-page volume, which was recognized as a Stonewall Book Award Honor Book by the LGBT Roundtable of the American Library Association. Nonetheless, he knew that so much of the power and vulnerability of these men came through their cadences, verbal tics, and body language, which couldn’t be fully expressed on the page. The project evolved into Pouring Tea, a performance piece that Johnson has pre­sented at colleges and for communities more than 150 times. In 2009 it took yet another form—the full-length Sweet Tea— The Play, which won the Black Theatre Alliance Award for best solo performance.

Last year Johnson, with Stephen Lewis, his husband and partner of 22 years, and codirector John L. Jackson (see page 13), released the documentary Making Sweet Tea, which follows Johnson as he reconnects with some of the men and performs their own stories for them. Johnson calls the process a labor of love but also a necessary step in understanding an important element of the American experience—and Johnson’s own expe­rience as well.

“My impulse was always to run in the other direction from that, because as a scholar I wanted the focus to be on my interlocutors, not me,” he says. “But everyone said to me, ‘What’s interesting is the relationship of the men’s stories to you. You are a Southern, Black, gay man, and your relationship with these men is important—and also your story.’ But I went kicking and screaming.”

Making Sweet Tea has picked up multiple awards on the festival circuit, and its producers are looking into streaming options. Johnson has written numerous other books, chapters, and scholarly articles, all pinpointing and elevating popu­lations otherwise ignored or misunderstood, such as Black, queer, Southern women. His successes in these endeavors have earned him myriad accolades, including induction in 2020 into the prestigious American Academy of Arts and Sciences. And his desire to seek out historically silenced voices has in fact become his top priority for strengthening the School of Communication.

“Northwestern has a history of valuing creative scholarship, collaboration, and engagement, so the bones are good, so to speak,” he says. “But my intention for the school is to foster equitable access and achievement, diversity of background and thought, a foot in the door, and a seat at the table. I feel an obligation to make sure that I’m not the last person of color or queer or first-generation college student to sit in this role. And I will lay any kind of groundwork to ensure that is the case. I’m here to listen and to lead.”